A Case Against Reality

Make an appointment to visit the gallery here 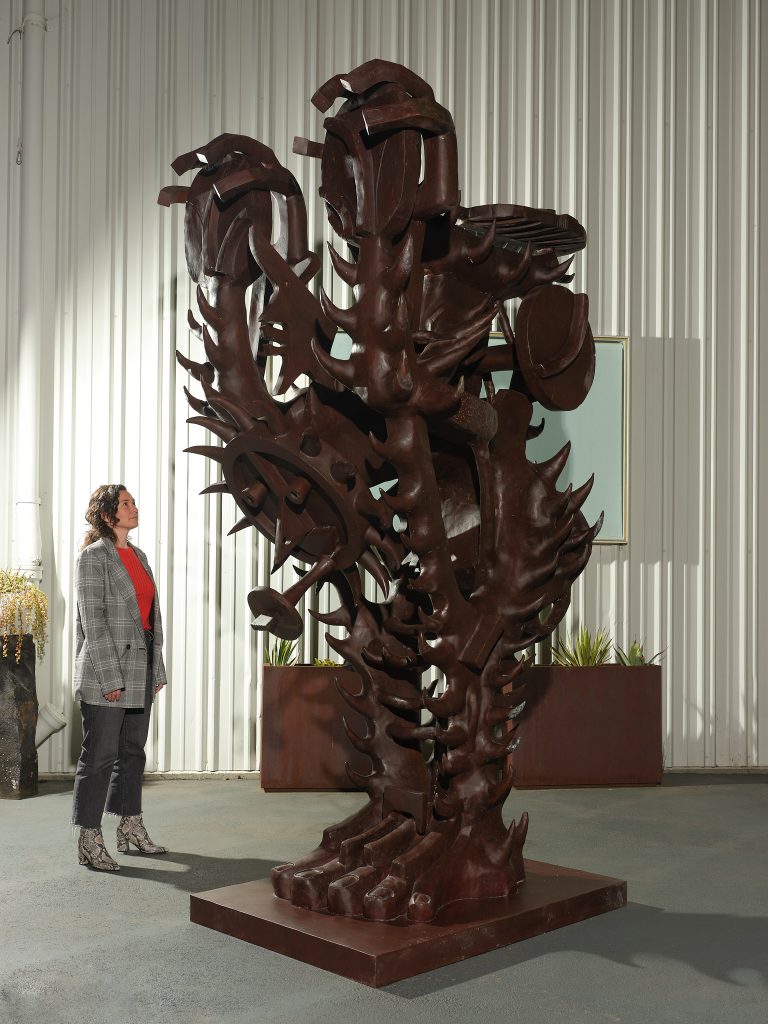 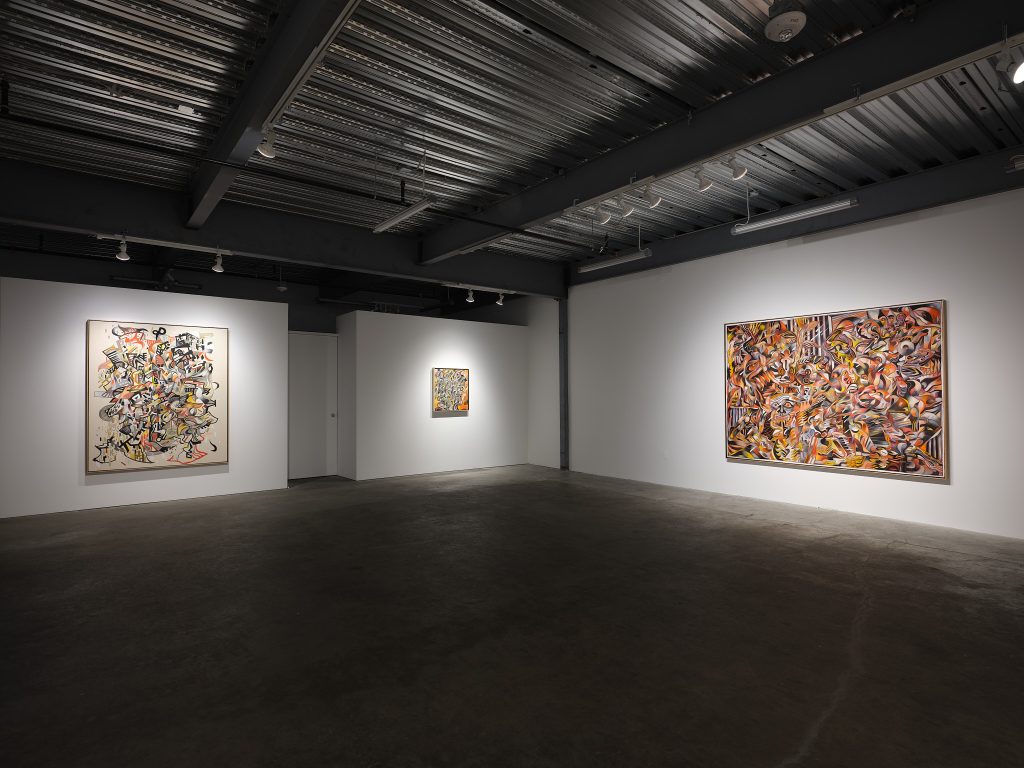 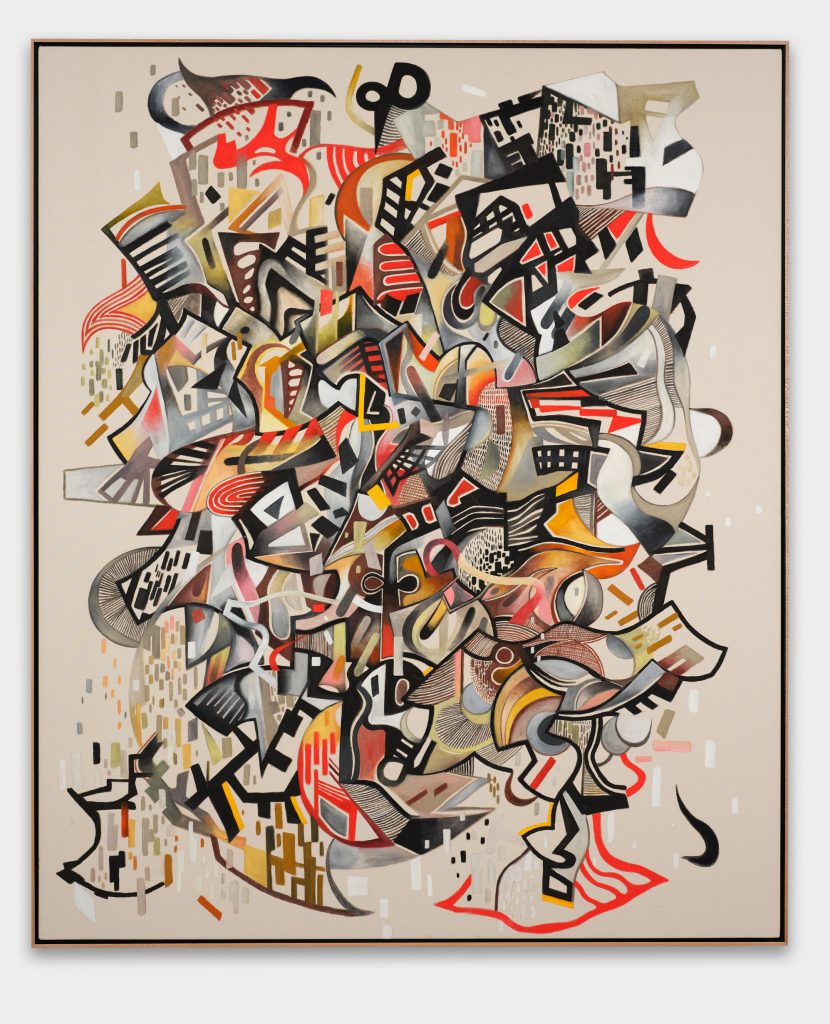 Ever Gold Projects is pleased to announce the exhibition A Case Against Reality, a two-part solo exhibition of new paintings and sculptures by the Bay Area-based artist Zio Ziegler. This will be Ziegler’s first exhibition with the gallery.

Drawing its title from the eponymous book by the cognitive scientist Donald D. Hoffman, the paintings and sculptures presented in A Case Against Reality indicate Ziegler’s inclination towards abstraction, which challenges the way the viewer understands images and in turn processes reality. Hoffman argues that we perceive images based on fitness functions rather than seeing an objective reality. These fitness functions project a simplified and efficient image instead of the underlying code. Mirroring this theory, Ziegler’s latest paintings demonstrate a reductive form in a reduced palette, urging the viewer to use new ways of seeing to question aesthetics and reality.

The first part of the exhibition opens on November 7th, with a selection of paintings that explore the possibility of human life in a non-objective reality. Rendered in rich tones of ochre and cadmium red, orange, and yellow, allusions to expressive faces float amidst kaleidoscopic planes. At times, just a single eye suggests the human form, whereas in two larger paintings, myriad faces emerge amidst a vast scene of perplexing perspective. Further paintings demonstrate further abstraction, with just the illusion of form thanks to recognizable imagery from Ziegler’s earlier works. These varying manifestations of the figure and form portray Hoffman’s theory of reality, with instances of humanity defined not by their standard “icon” but by inference.

The second part of the exhibition, opening on December 1st, features a new series of paintings, bold black marks, unwavering in structure and solidity, sweep across a barren white canvas. The combination of simple mark-making and complex perspective calls to mind the art historical debate of “finished” vs. “complete” in painting. The Neoclassical and Romantic “finished” painting was void of blank space or unpainted detail, while the Impressionist painters who followed considered their paintings “complete” without such a polished effect on the canvas. Ziegler’s stark paintings—not “finished” in the classical sense—guide the viewer towards their own subjective perception of the image, a mirror of the reality they understand. In these works, image and pattern making often evoke experiences of pareidolia, as the viewer seeks for hints of a recognizable form in an otherwise abstract surface.

The suite of paintings is accompanied by three new monumental and figurative bronze sculptures. These mythologically inspired creatures recall many of Ziegler’s earlier figurative paintings, extrapolated in 3D to escape the limitations of the canvas. The black and white paintings, like undiscovered scripture, flatten these figures back onto the canvas, portraying every perspective on a single plane. The paintings thus evoke a sense of narrative and allegory with minimal mark-making and charged gesture. Like Greek voyagers entering Rhodes past the Colossus, visitors will enter the second part of the exhibition passing by two sculptures, while the third is displayed outside, up the block from Ever Gold at 1150 25th street, in front of the entrance to Claudia Altman Siegel Gallery and McEvoy Foundation for the Arts.

Much of Ziegler’s conceptual exploration concerns the physical ideas of self and the way we understand and construct the reality that we live within. In Ziegler’s words, “These works occur on the brink of recognition. They suggest form, and then dismantle it, they imply, but not quite enough to convince. They exist in a space between comprehensive observation and perception and disassemble pre-existing ideas on form. What is it that makes us recognize a human form as such, is it pareidolia, a primitive pattern recognition, a fulfillment of symbols or triggers in the occipital lobe?” In the end, a theophanic search for recognition mirrors the viewer’s own quest for self-actualization.

Whereas Hoffman’s understanding of our perception of reality concerns fitness functions related to survival, Ziegler’s reductive imagery also considers quantum existentialism in correlation to beauty. Following the Italian Renaissance author Leon Battista Alberti’s conjecture in De pictura that “in painting beauty is as pleasing as it is necessary,” Ziegler’s paintings seek not only to drive an understanding of reality but also of humanity. While art may not be able to solve the big problems of the world, the incorporation of aesthetic appreciation in our fitness functions reveals that,in our interpretation of reality, beauty exists alongside survival.

Zio Ziegler (b. 1988, Marin County) is an artist living and working in the Bay Area who exhibits his large-scale paintings, sculptures, and murals extensively and internationally. Ziegler received a BFA from The Rhode Island School of Design in 2010. Recent solo exhibitions include Meta Myths at Allouche Benias Gallery, Athens, Greece (2019); The Fourth Wall at the Marin Museum of Contemporary Art (2018); Bernard Gwilliam and the Quantum Modernism at Jules Maeght Gallery, San Francisco, CA (2017); Meta Species at Ochi Gallery, Idaho, CA (2016); and Et in Arte Ego at Antonio Colombo Arte Contemporanea, Milan, Italy (2014). Ziegler has been commissioned by the United Nations for a variety of projects, and he lectures on art, engineering and reality at Stanford University and University of California, Berkeley. His work is included in many private collections worldwide.

Explore a virtual walkthrough of the exhibition below 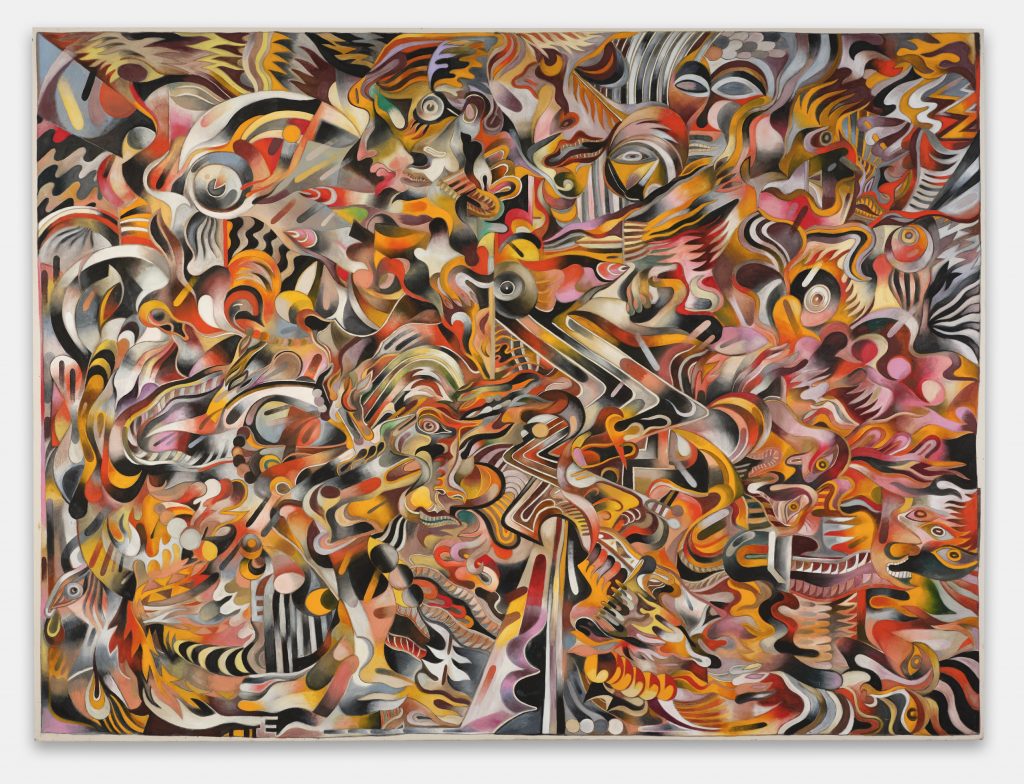 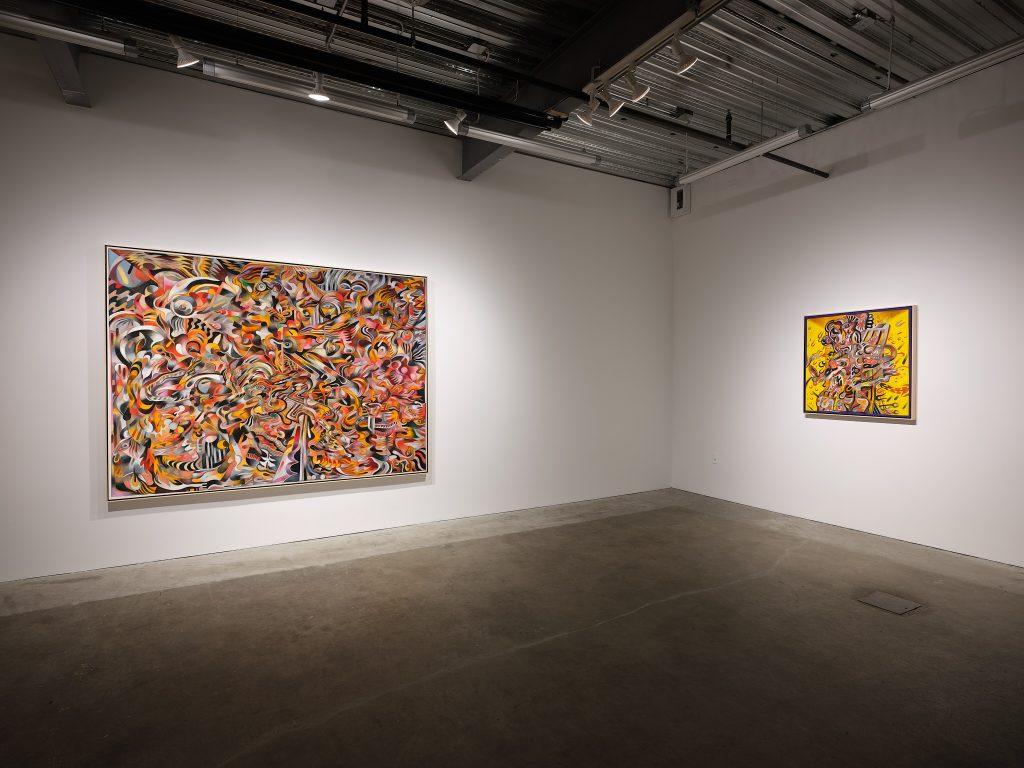 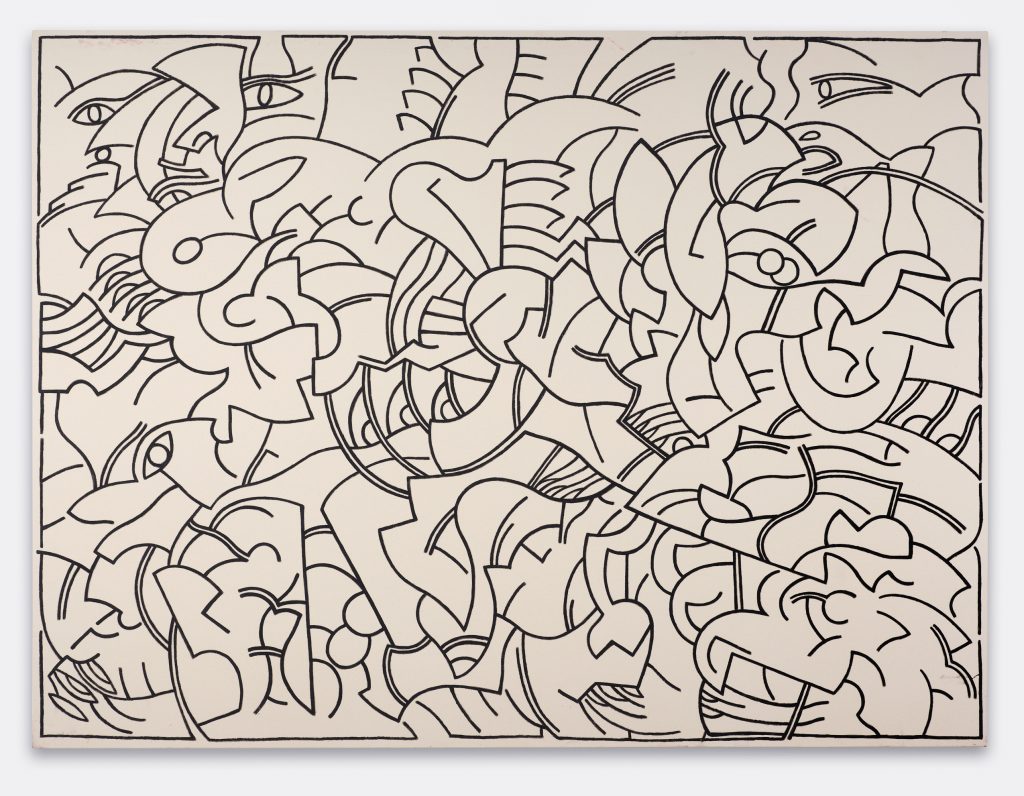 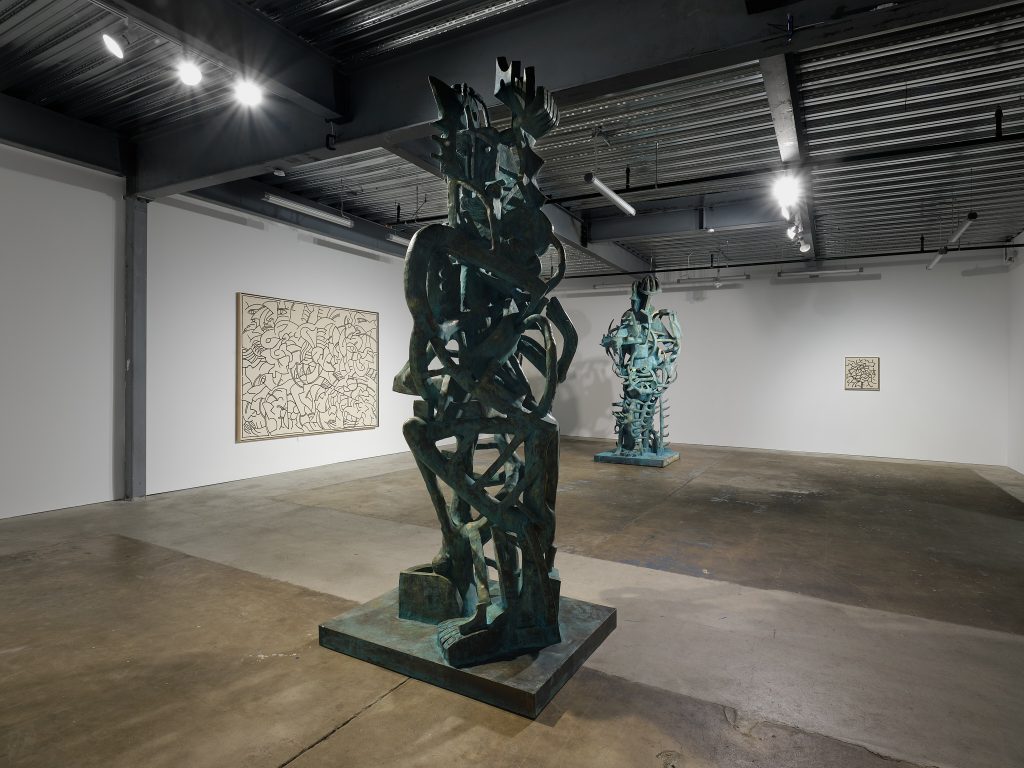 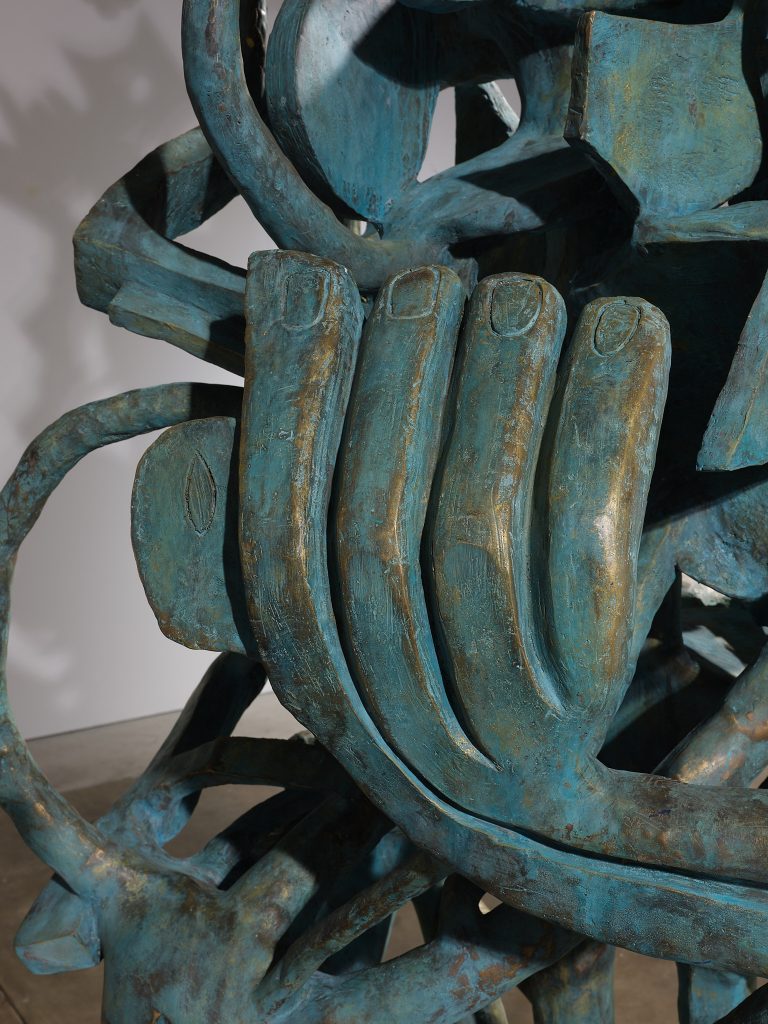