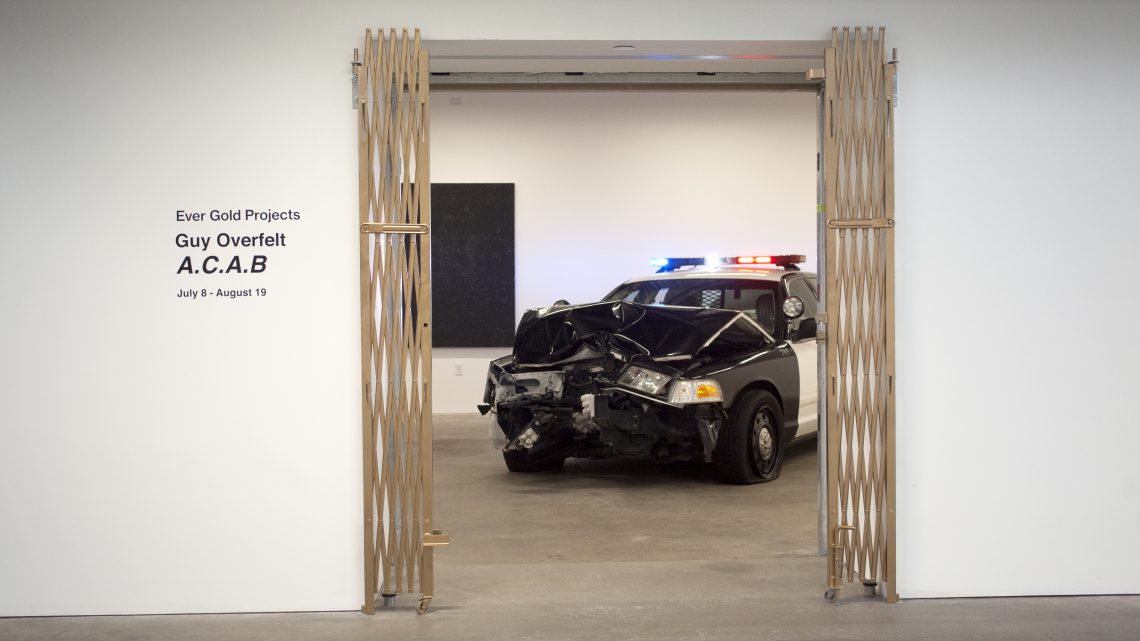 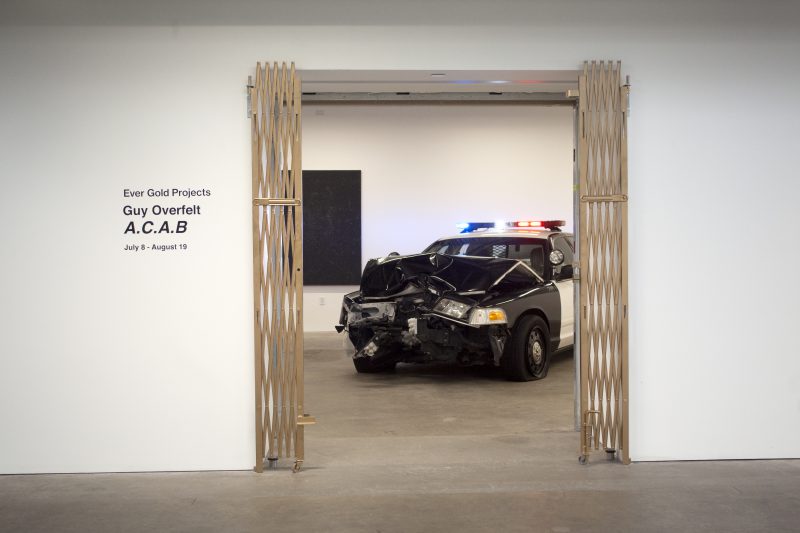 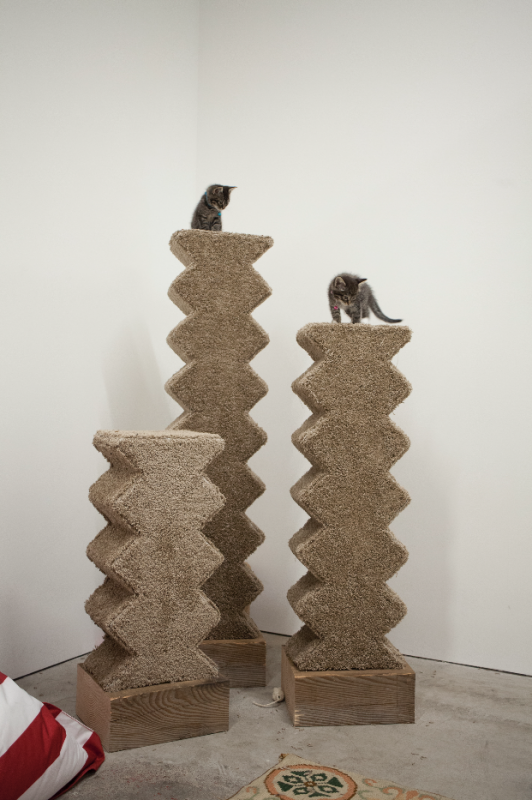 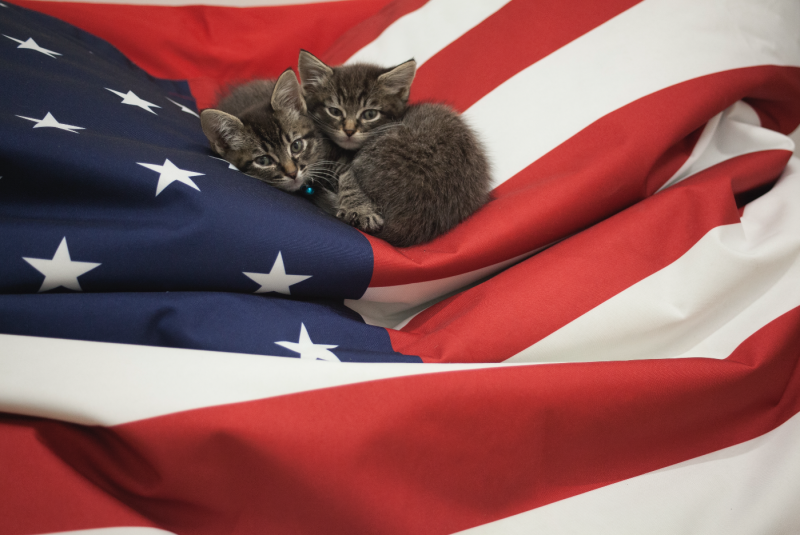 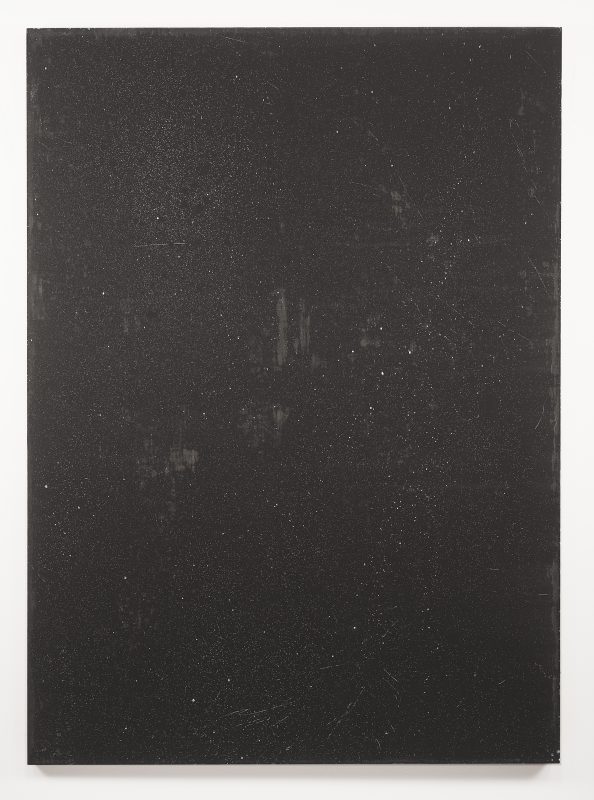 Guy Overfelt “I understand that criticism will only make me better”, 2017. Road marking paint on Belgian linen. 48×66 inches. 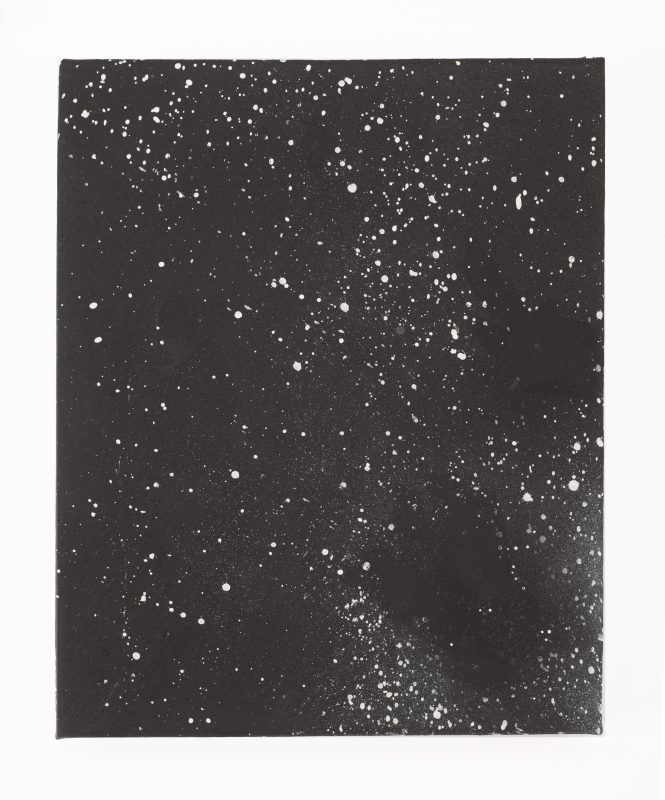 Guy Overfelt “Just because I made a mistake doesn’t mean I am a mistake”, 2017. Road marking paint on Belgian linen. 8×10 inches. 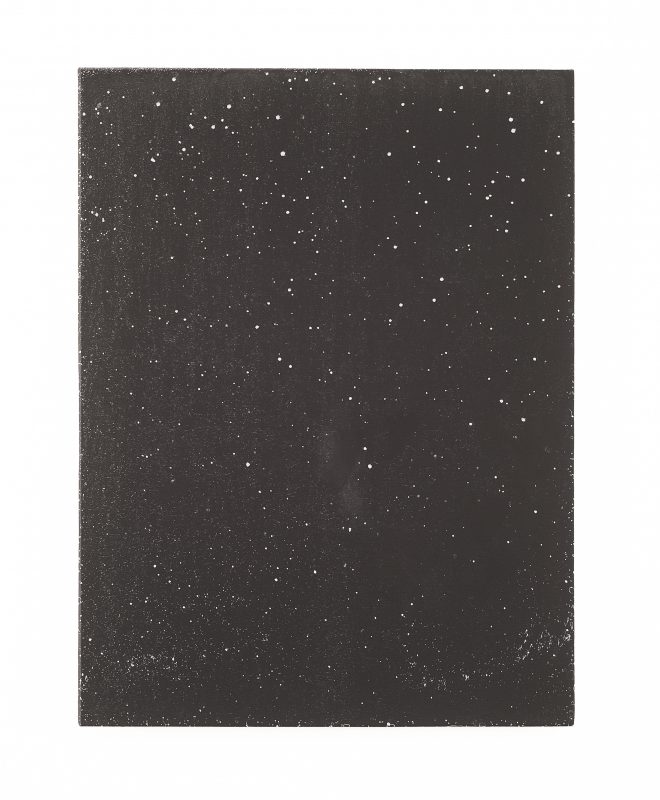 Guy Overfelt “When I maintain my boundaries, I feel safe and protected. No one can hurt me”, 2017. Road marking paint on Belgian linen. 18×24 inches.

Beginning 8 July 2017, Ever Gold [Projects] in San Francisco presents ‘Guy Overfelt. A.C.A.B., 1995 – 2017’, the fourth major San Francisco exhibition devoted to the politically charged, darkly exuberant art of Guy Overfelt. Comprised of six major works spanning the artist’s career, this exhibition constitutes a long-overdue, comprehensive survey in his adopted city. While Overfelt’s groundbreaking works found early recognition in Europe and New York, the artist spent the entirety of his career in San Francisco’s Mission District, where he lived and worked until his untimely death in 2017 at the age of 40. The exhibition at Ever Gold [Projects] is conceived to share and celebrate his unwavering vision of the world as an infinite, corpulent, and lustful universe of expressive opportunity. Assertively pushing against the safety of cultural conventions, Overfelt broke accepted rules of public nicety and expanded the frontiers of artistic opportunity through unbridled, brazenly ‘Maximalist’ works. In short, Overfelt brought the impolite and culturally unspeakable to the center of the conversation.

Organized by Andrew McClintock, ‘Guy Overfelt. A.C.A.B., 1995 – 2017’ will remain on view through 19 August 2017. The exhibition will unfold over 8,200 square feet, tracing the evolution of the artist’s vision and methods through career-defining works: ‘Some POPO Are Better Than Others’ (1995); ‘The Kitten… and the Partisan Idol Workshop’ (2005), ‘The Occupy Myth’ (2011); ‘T. Martin / Giacometti’ (2012); ‘Funky cold medina. In pursuit of my seclusion…’ (2014); and ‘RioGrandCrimeaChandelier’ (2017). ‘Guy Overfelt. A.C.A.B., 1994 – 2017’ will be accompanied by a fully-illustrated catalogue released by Ever Gold [Projects] Publishers. The book will feature a foreword by Lawrence Robert Rinder, Director of the Berkeley Art Museum and Pacific Film Archive at the University of California, Berkeley, along with a series of scholarly essays by Gary Garrels, Elise S. Haas Senior Curator of Painting and Sculpture at SFMOMA; Charles Desmarais, Art Critic for the San Francisco Chronicle; Okwui Enwezor, Director of the Haus der Kunst, Munich, Germany; and Jens Hoffmann, Susanne Feld Hilberry Senior Curator at the Museum of Contemporary Art Detroit, Director of Exhibitions and Public Programs at the Jewish Museum New York, and Artistic Director of Front International: Triennial of Contemporary Art, Cleveland.

After his death and in a moment of heightened political tension, Guy Overfelt’s radical oeuvre is more relevant than ever. From religion, commerce, sex, and racial and gender stereotypes, to role of the artist himself, no subject was off-limits and taboo was embraced. Overfelt viewed art as a machine set on a continuous feedback loop, delivering something superficially chaotic but replete with hidden references beyond first blush, and his existential quest becomes clearer as one moves around and through his installations. Overfelt considered his separate works as components of one single boundless piece realized over time. “If you know my work, you know that it is never finished,” he once said.

Overfelt’s first solo show in San Francisco, ‘Some POPO Are Better Than Others’ was presented at Refusalon Gallery in the South of Market neighborhood. His only work to specifically reference the urban and cultural landscape of San Francisco, the installation – a black world of assembled mundane items such as cardboard, scrap wood, legal pads, and Styrofoam – sent seismic shocks across the local art scene. Overfelt’s deep fascination with Ikea and the act of buying spurred him to create modular set-ups of ‘furniture’ for viewers to navigate. Linking the interior to the exterior with color, Overfelt parked a black Trans AM car with fiery phoenix labels in the gallery’s yard – a sculpture and a symbol to Americans as both a literal and figural vehicle to freedom.

The Kitten… and the Partisan Idol Workshop (2005)

‘The Kitten’ was originally conceived as a two-part project: the first part, a public bazaar-like, sculptural installation presented in 2003 at Ronald Feldman Fine Arts, New York; the second part, a private, ‘invitation-only’ performance that was activated by a series of happenings called ‘Kitten Soiree Mollycoddle Cabarets,’ which took place in San Francisco in 2006. The project was inspired by the intersection of commerce and religion, specifically the ancient pre-Islamic story of the Kaaba. The two parts of ‘The Kitten’ are comprised of five core elements: Egyptian-made hookah pipes and paraphernalia from a seized shipping container; dreamcatchers purchased on eBay; beaver-felt cowboy hats; a collection of ancient gongshi stones; and ultraviolet neon picture-words depicting slang for vagina. Being shown for the first time since it was made, ‘The Kitten… and the Partisan Idol Workshop’ joyously reincarnates 360 banished idols, brazenly attending to our worship of the gods of commerce and spectacle. “‘The Kitten’ is my collection of pussy words drawn from African, Creole, Cajun, Ebonics and Hip-Hop dialects, as well as Trump’s private conversation recorded just before meeting the cast of Day of Our Lives,” Overfelt remarked in February 2006. In his quest for the ‘Ultimate Kitten Word,’ Overfelt amassed over 6,900 terms. His persistent pursuit can be seen as the result: there is no ultimate word for the female genitalia.

‘The Occupy Myth’ is an analytical unmasking of the myth of Man as Creator and Occupier. The artist sought to understand why, how, and what humans create by exploring Creationist and Evolutionist theories in tandem. The irreverent representation of the human body and brain is structured into levels to suggest our categories of perception: the archetypal, the real, the unconscious and the rebellious. Each of the six nouns in the work’s subtitle (‘The Mind, the Body and the Spirit, the Shit, Prick and the Rebellious Part’) is metaphorically portrayed, while the function of the brain itself unfolds through a calculated combination of readymades and images. A series of stacked tables constitutes the ‘brain,’ in which a ‘train of thought’ – a toy train mounted by a snake’s head and tail – circles. Digestible ‘information’ enters the ‘brain’ in the form of pornography-wrapped logs of wood, representing the physicality of creation. Cut and disseminated, ‘information’ is incessantly processed and reproduced by cameras, mirrors, and computers. Smoke rings erupt from ‘the Asshole,’ a fleeting byproduct of the frenzied machine, a personification of the Spirit, alluding to the pursuit of the ephemeral moment.

Overfelt continued to explore installation with ‘T. Martin / Giacometti,’ created for the 2012 SECA at the San Francisco Museum of Modern Art, his first national museum exhibition. The museum’s setting and history inspired Overfelt to explore the values of Modernism. Juxtaposing T. Martin’s suburban life with the famous studio of Alberto Giacometti, Overfelt transposed traditional perspectives. Photographs of Martin’s life and Brancusi’s studio line the perimeter of this installation, while quotidian mechanical objects fill its interior: a remote control-operated monster truck, a brakeless mini-bike, and an industrial candy maker surrounded by Skittles. A rod of stacked Skittles alludes to Giacometti’s ‘Walking Man’ and pays homage to Marcel Duchamp’s readymades (Duchamp and Giacometti were considered by Overfelt to be the only true Modernists).

On a drive between San Francisco and Bolinas, California, Overfelt conceived a work that would be his own hermitage – or ‘ermitage.’ The result is ‘Funky cold medina,’ part mosque, part temple: a place of religious seclusion covered in a carpet of towels adjoined by the artist’s Spukaki technique, punctuated by crystals, incense, ceramic donkeys, and camel saddle footstools. Beneath a veritable cloud of 240 neon ‘kitten words’ – such slang terms for female genitalia as ‘Fluttering Love Wallet,’ ‘Cock Pocket,’ and ‘Breakfast of Champions’ – float above the scene. Viewers are invited to lie down and surrender to transmitting light. Formally conflating the visual language of contemporary urban America with the influence of his travels to ancient spiritual sites in the Middle East, Overfelt challenges post-9/11 anti-Islamism on his own terms. Glowing neon bewitches viewers into a charged web of political incorrectness, literally illuminating taboos and hypocrisies.

The final work of the exhibition, ‘RioGrandCrimeaChandelier’ (2017) raises questions about sociopolitical consumerism in relation to disparate cultures and classes by exploring tourism in analogous third world border towns: Texas-Mexico and Crimea, Ukraine. In this installation, culturally significant objects are purged of their traditional function due to the homogeneity of modernization, thus masking differences and easing fears of the first world trespasser. Nearly identical trinkets from Mexico and Crimea, cities 6,000 miles apart, blend in a network of chandeliers that incorporate 176 Mexican and Russian neon ‘cat words.’ To create this work, Overfelt embarked on shopping trips in search of ‘Cat objets d’art,’ transforming a private act of consumption into an adventure in global trade. Imposter designer handbags, sombreros, Ukrainian hanging lights, and Mexican blankets mingle in ways that divulge and then detach from the cultural myths and stereotypes that tourism has encouraged. 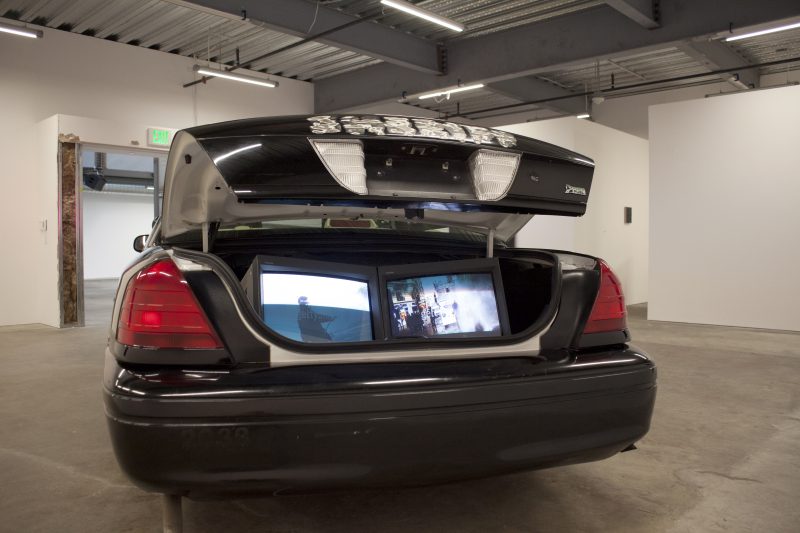 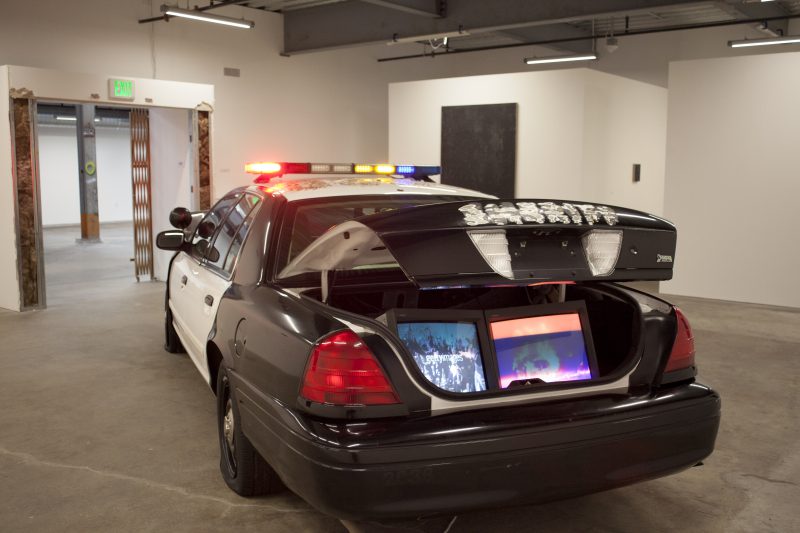 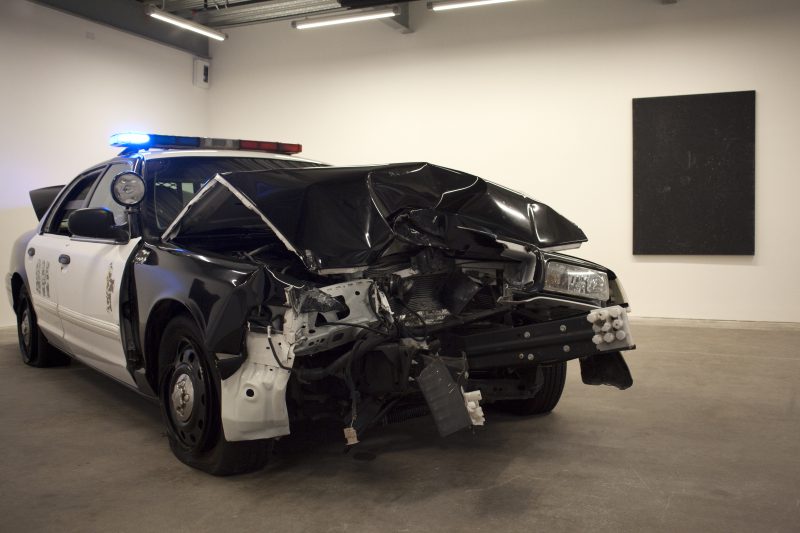 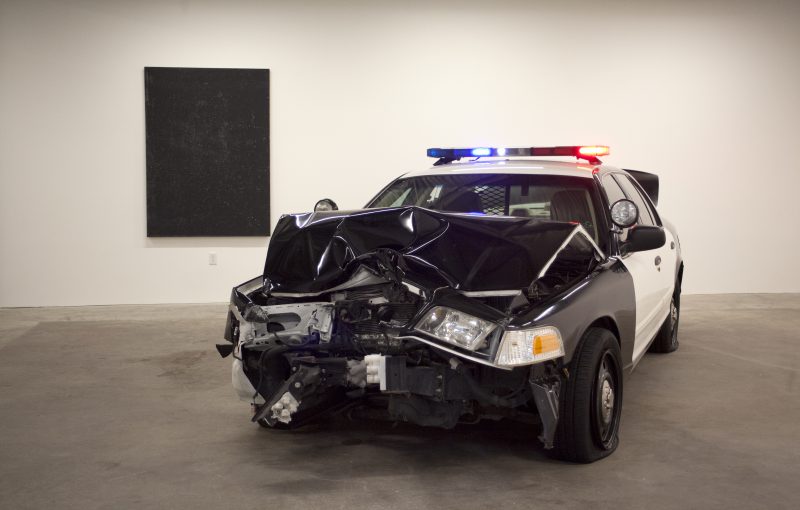 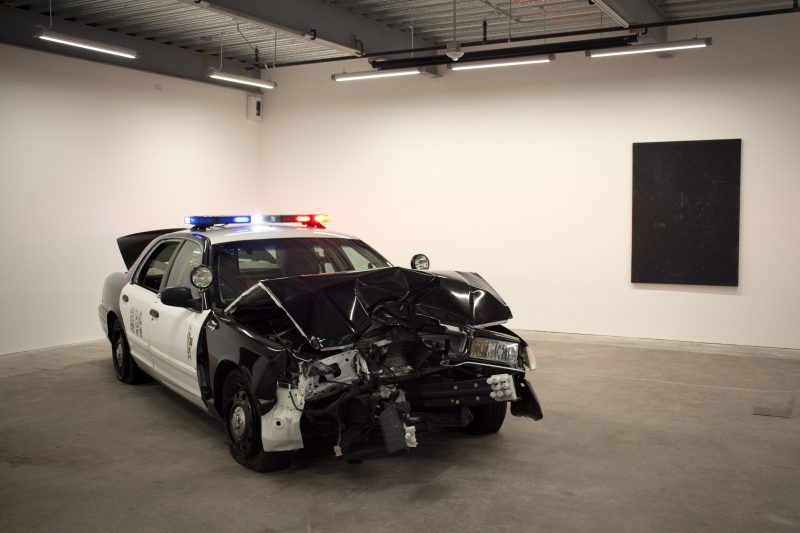