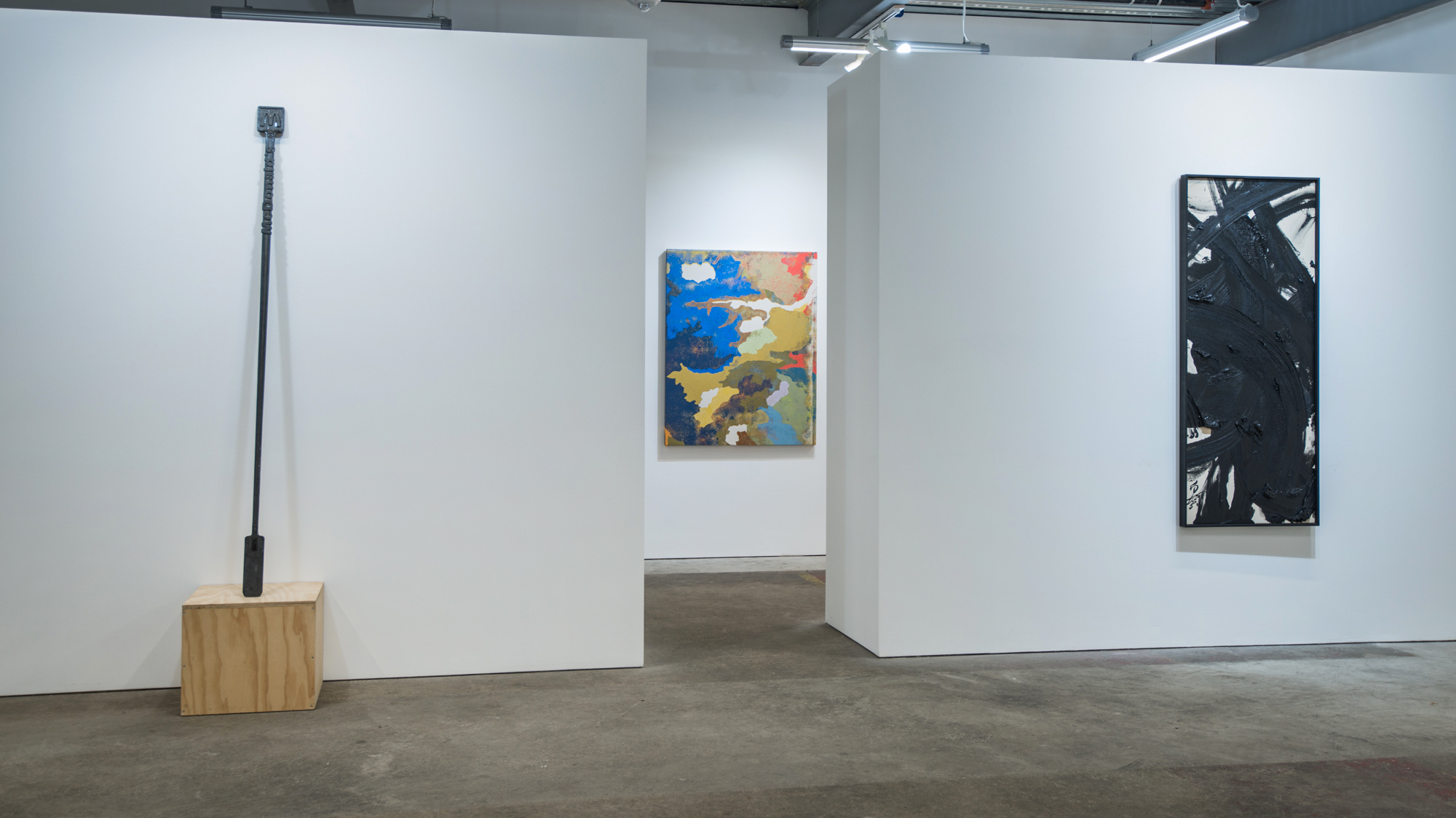 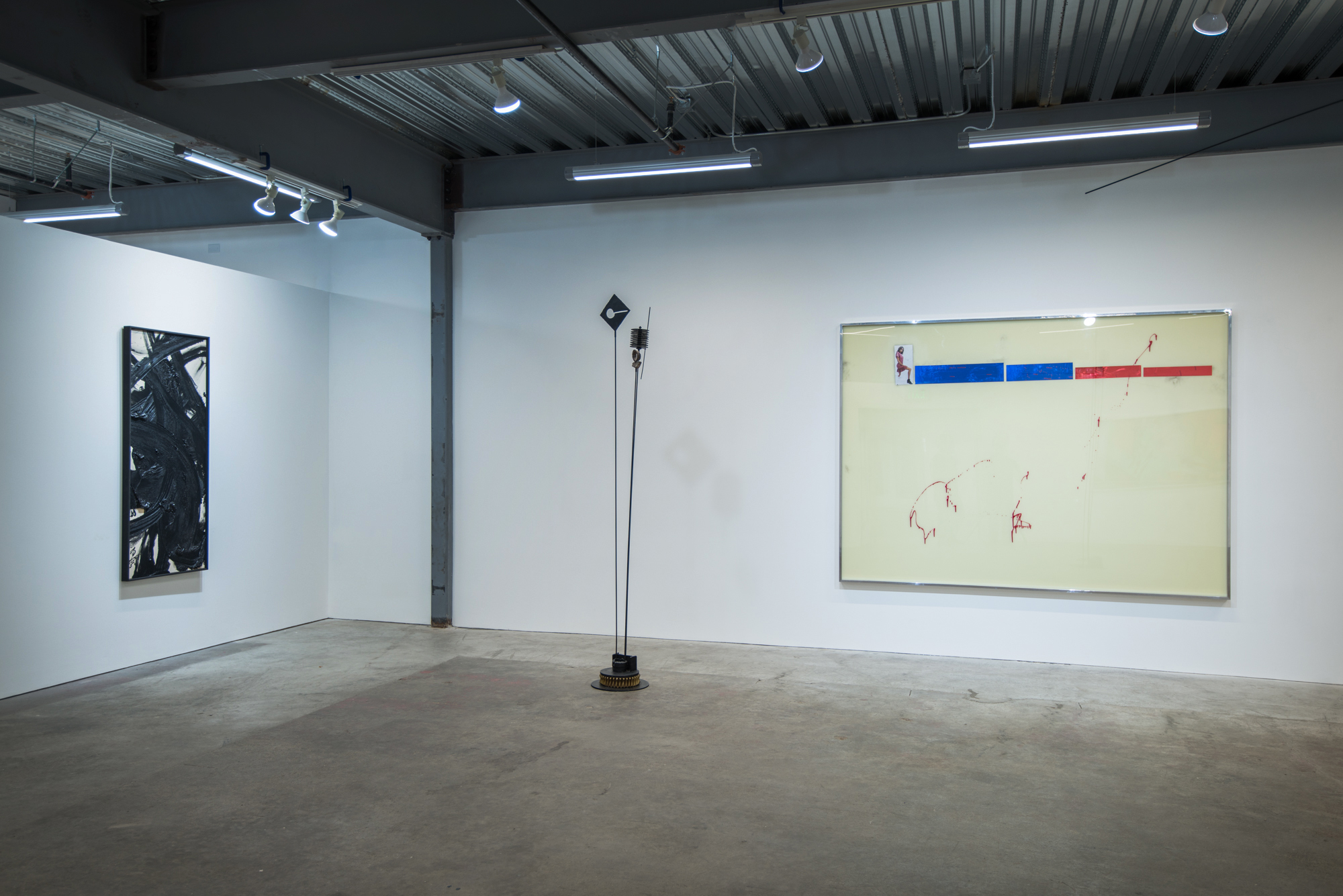 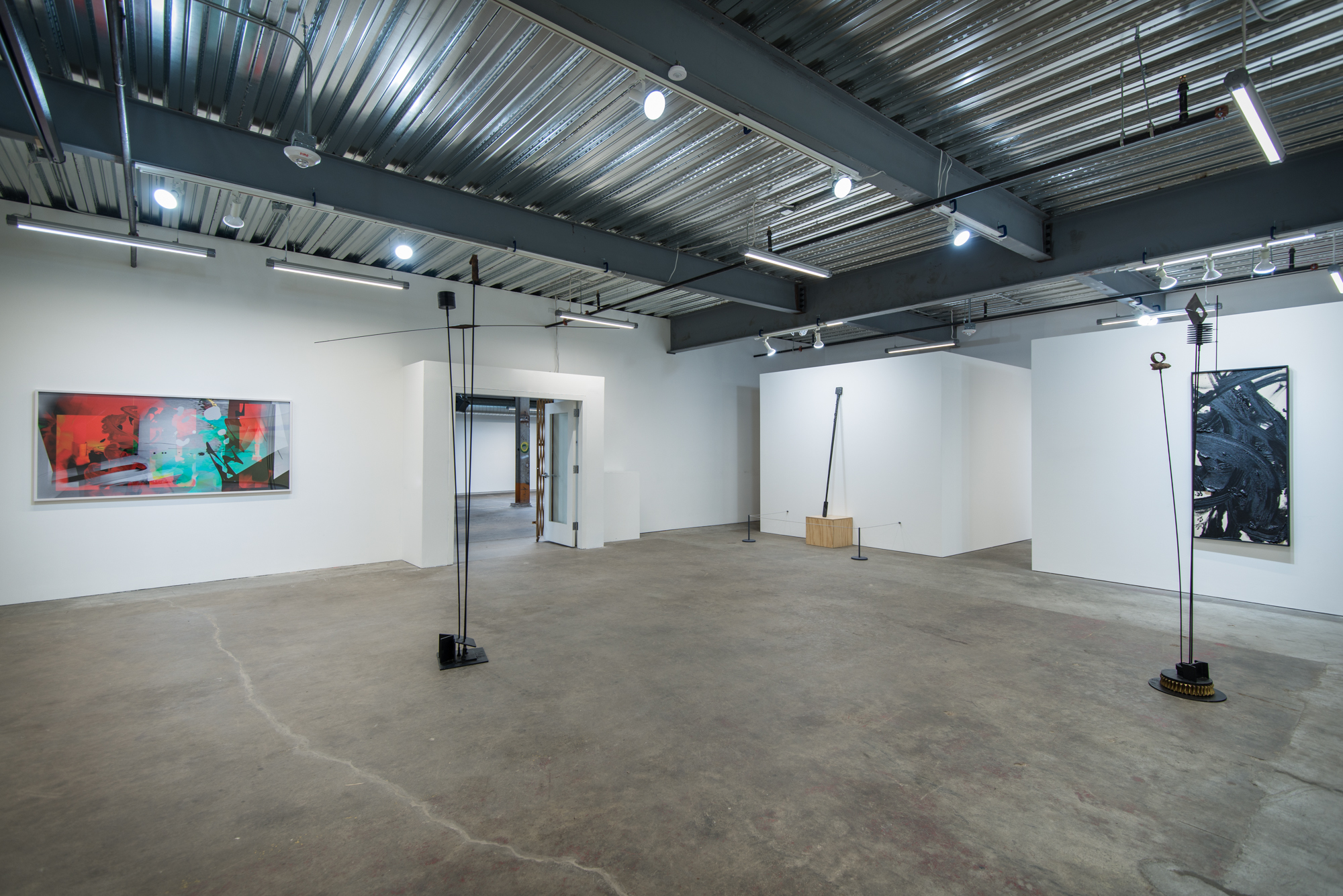 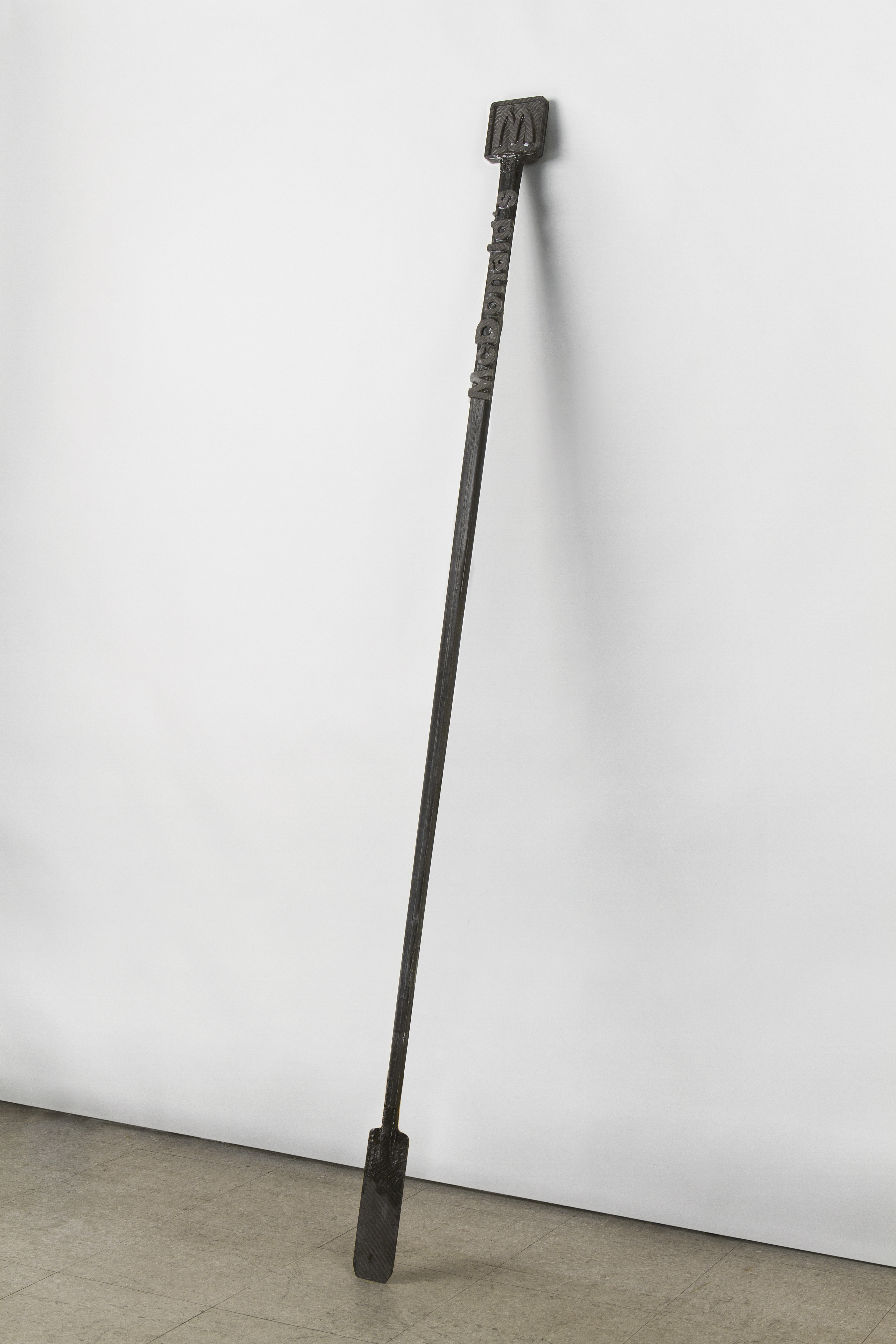 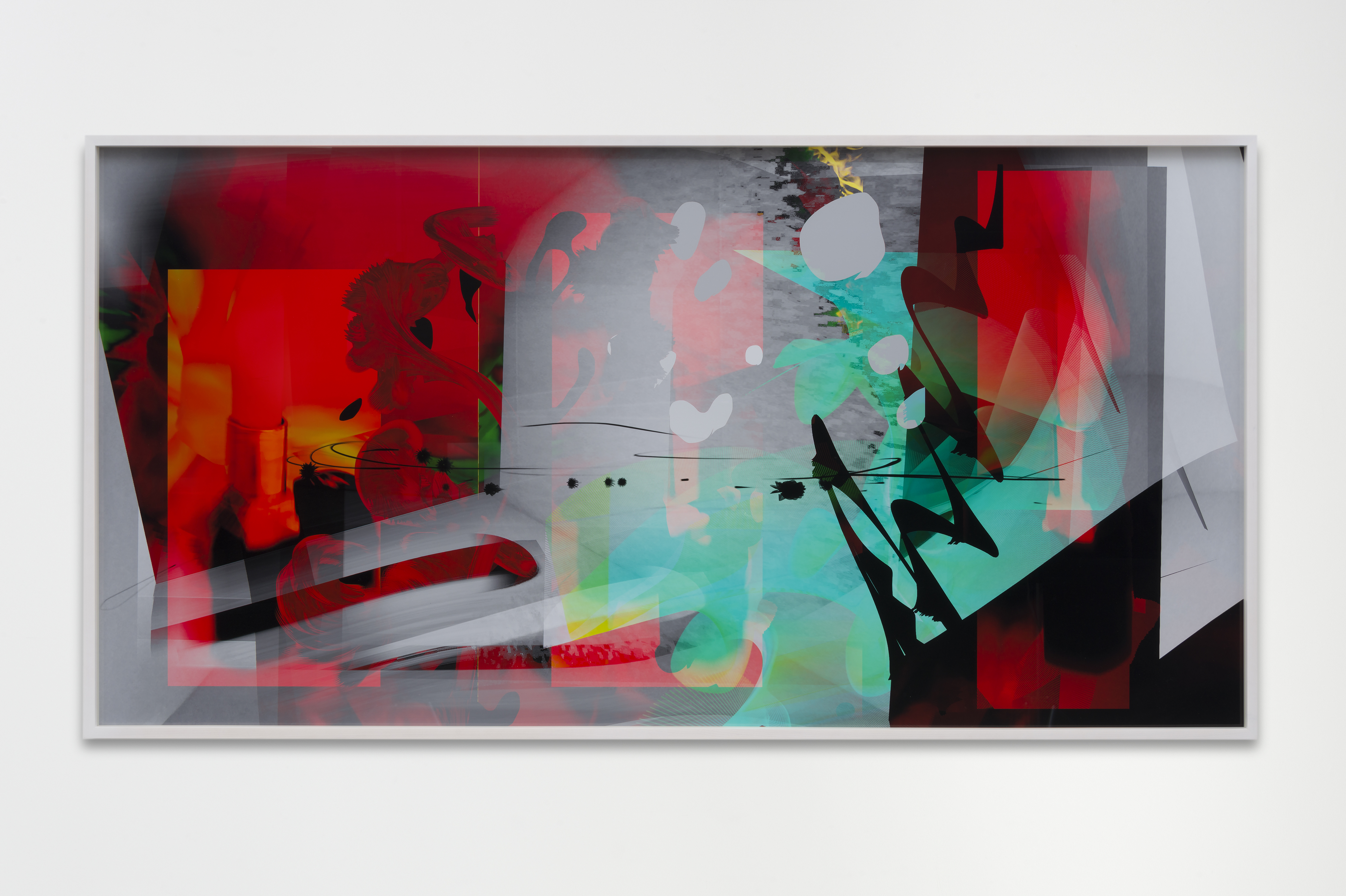 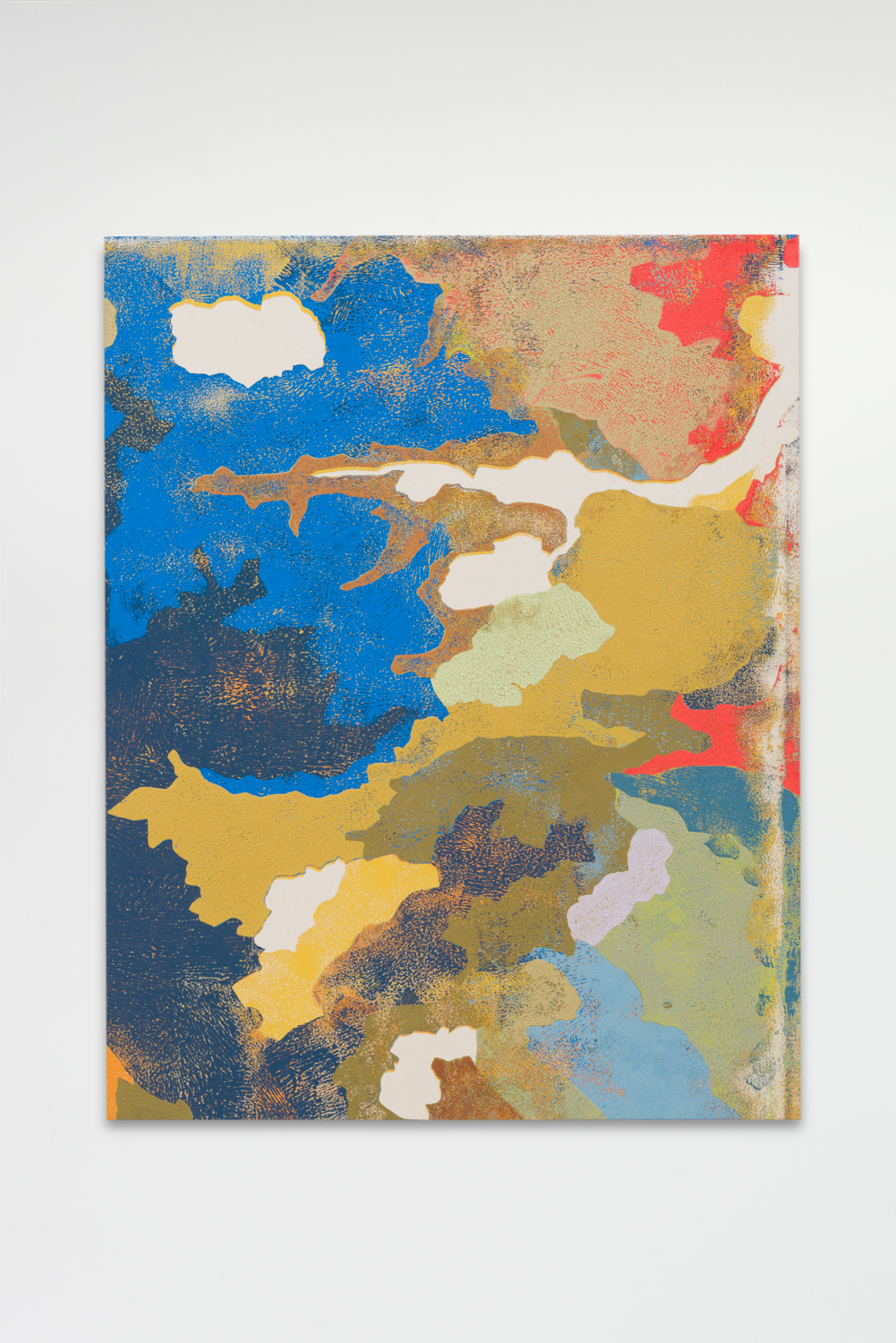 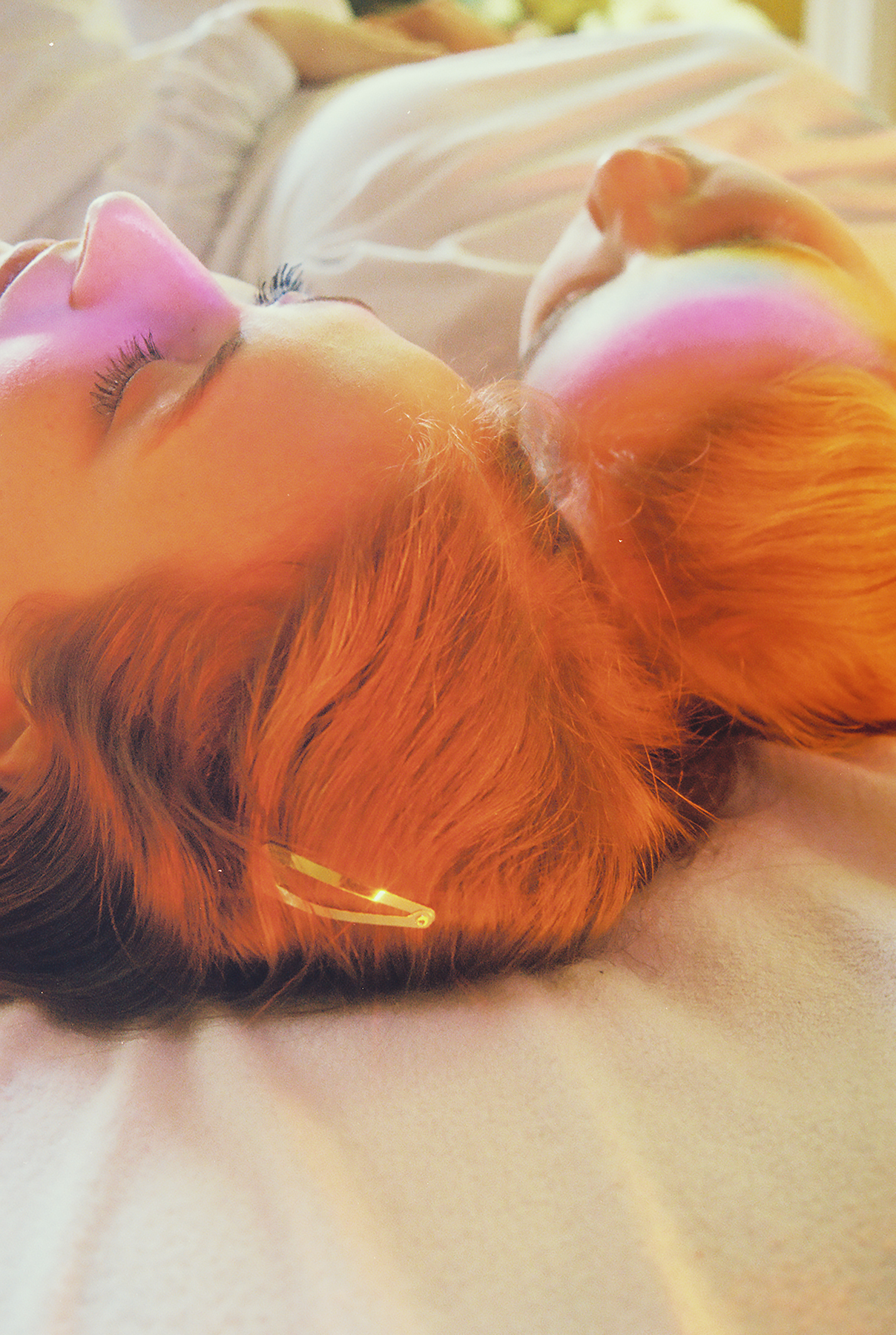 Takis is among the leading kinetic artists, having created a pioneering body of sculptures, performances, and sound pieces focused on electromagnetism, a force with which he has been fascinated since the beginning of his career. Takis settled in Paris in 1954, and crafted his first “Signal” sculpture the following year. His best-known series, the “Signals” are composed of delicate, moving rods springing from a solid base and topped with various industrial and technological fragments. Referencing natural and manmade antennae, they seem to commune with their surroundings. Magnets are the animating center of his works. He has harnessed their pull to suspend human beings and objects in space. For Takis, electromagnetism is a unifying force, which runs through all bodies, and which he celebrates in art that, in his words, “binds together in space, objects, metals, roaming particles of the cosmos.”

Kazuo Shiraga was born in 1924 in Amagasaki, Japan. Shiraga attended the Kyoto Municipal School of Painting and the City Art Centre of Osaka, familiarizing himself with both traditional Japanese painting and Western oil painting. Shiraga cofounded the experimental Zero Society (Zero-kai) in 1952 with Saburō Murakami, Atsuko Tanaka, and Akira Kanayama. He began a series of signature works in 1954, for which he suspended himself on a rope above canvas, manipulating the paint with his feet. In 1955, he joined the Gutai collective, founded the previous year by Shozo Shimamoto and Jiro Yoshihara. That year, he performed Challenging Mud, one of his best known works, as well as Red Logs (Please Come In). Work by Shiraga and other members of the Gutai group was exhibited at Martha Jackson Gallery in New York in 1958, and was generally understood as being derivative of Abstract Expressionism, in a misreading the group would strive to clarify. Japan’s Expo ’70 hosted the last major public presentation of Gutai work before the collective was dissolved in 1972. Shiraga became a Buddhist monk in 1971, training at the Tendai-sect temple Enryakuji on Mount Hiei; he would resume painting the following year after the disbanding of Gutai. In 1998, Paul Schimmel organized Out of Actions: Between Performance and the Object, 1949-1979 at the Museum of Contemporary Art, Los Angeles; Out of Actions was arguably the first major museum exhibition exploring the complex dynamics of postwar artwork involving action and performance, and work by the Gutai group was displayed prominently at the entrance. Schimmel is also responsible for organizing Destroy the Picture: Painting the Void, 1949-1962, an exhibition at the Museum of Contemporary Art, Los Angeles (2012-13) which traveled to the Museum of Contemporary Art Chicago (2013), and included work by Shiraga and other artists affiliated with Gutai. In 2013, the Solomon R. Guggenheim Museum presented Gutai: Splendid Playground, a retrospective of the Gutai Art Association, including two generations of Gutai production and featuring work by Shiraga. Also in 2013, the San Francisco Art Institute presented Experimental Exhibition of Modern Art to Challenge the Mid-Winter Burning Sun: Gutai Historical Survey and Contemporary Response, the first West Coast survey exhibition of Gutai. In 2015, the Dallas Museum of Art presented Between Action and the Unknown: The Art of Kazuo Shiraga and Sadamasa Motonaga, pairing Shiraga with Motonaga, another experimental painter from the Gutai group.

Tom Sachs (b. 1966, New York, NY) is a sculptor, probably best known for his elaborate recreations of various Modern icons, all of them masterpieces of engineering and design of one kind or another. In an early show he made Knoll office furniture out of phone books and duct tape; later, he recreated Le Corbusier’s 1952 Unité d’Habitation using only foamcore and a glue gun. Other projects have included his versions of various Cold War masterpieces, like the Apollo 11 Lunar Excursion Module, and the bridge of the battleship USS Enterprise. Recent exhibitions include Space Program: Europa at Yerba Buena Center for the Arts (San Francisco); Nuggets at Jeffrey Deitch (New York); Satan Ceramics at Ever Gold Gallery (San Francisco); Tom Sachs: Boombox Retrospective 1999-2016 at the Brooklyn Museum; Nuggets at Lora Reynolds Gallery (Austin); Tom Sachs: Boombox Retrospective 1999 – 2015 at The Contemporary Austin; Chawan at Salon 94 (New York); Satan Ceramics at Salon 94 Freemans; and American Handmade Paintings at Galerie Thaddaeus Ropac (Paris). Sachs lives and works in New York.

Sterling Ruby was born in 1972 on Bitburg Air Base in Bitburg, Germany. He graduated in 1996 from the Pennsylvania School of Art and Design, Lancaster. Ruby received his B.F.A. in 2002 from the School of the Art Institute of Chicago, Illinois, and his M.F.A. in 2005 from the Art Center College of Design, Pasadena. Ruby is quite versatile in regards to his aesthetic strategies and works in a variety of media—glossy and color-saturated poured polyurethane sculptures, drawings, collages, richly glazed ceramics, graffiti-inspired spray paintings, and video—maintaining a constant tension within a multitude of elements. His work engages with issues related to the violence and pressures within society, autobiography, and art history. Throughout, he vacillates between fluid and static, minimalist and expressionist, pristine and dirty. Of the diverse forms that constitute his oeuvre, the paintings are the most formally abstract. Ruby has long been influenced by the sociological implications of urban demarcation, vandalism, and the power struggles of gang graffiti. In his paintings, acts of defacement are transformed into a painterly sublime. Ruby lives and works in Los Angeles.

Pour was featured on the Forbes 30 Under 30: Art And Style list in 2015 and 2017. His work has been written about in the New York Times, Bloomberg, The Brooklyn Rail, Forbes, W Magazine, The San Francisco Chronicle, Canvas Magazine, SFAQ Magazine, The Japan Times, Tokyo Weekender, Metropolis, Widewalls, and SF Weekly.

A solo exhibition at the Tehran Museum of Contemporary Art (Tehran, 2022) is forthcoming.

Oscar Murillo is an artist living and working in London. Born in Colombia, Murillo earned his B.F.A. in 2007 from the University of Westminster, London, followed by his M.F.A. in 2012 from the Royal College of Art, London. His large-scale paintings imply action, performance, and chaos, but are in fact methodically composed of rough-hewn, stitched canvases that often incorporate fragments of text as well as studio debris such as dirt and dust. His paintings, video works, and performances are tied to a notion of community stemming from the artist’s cross-cultural ties to diverse cities and places in which he travels and works. Murillo’s works and projects have been the subject of solo exhibitions at prominent institutions worldwide. Most recently, presentations were held in 2017 at the Yarat Contemporary Art Centre in Baku, Azerbaijan and in 2015 at the Museo de Arte de la Universidad Nacional de Colombia, Bogotá; Centro Cultural Daoíz y Velarde, Madrid (part of ArcoColombia 2015); and Artpace, San Antonio, Texas. Also in 2015, as part of Performa 15 in New York, Murillo presented Lucky dip, a series of performances and installations that took place over the course of one week at the Alexander Hamilton U.S. Custom House, an important historical site in downtown Manhattan. Opening in September 2017 at Haus der Kunst in Munich will be a solo exhibition of Murillo’s work. A comprehensive monograph published by the museum in association with David Zwirner Books with a foreword by Okwui Enwezor, contributions by Emma Enderby and Anna Schneider, and an interview with the artist by Maria Belen Saez de Ibarra will accompany the show.

Petra Collins (b. 1992, Toronto, Canada) is an artist and curator living in New York. Shooting since the age of 15, her images are fueled by self-discovery and contemporary femininity which explore the complex intersection of life as a young woman online and off. Collins’s images offer an unflinching honesty, exploring the privacies and publicities of growing up as a woman at a moment when female bodies are ubiquitously hyper-mediated by Photoshop and social media. Collins has also curated a handful of shows: Gynolandscape and PussyPat (New York, NY); Strange Magic (Los Angeles); Literally Bye at Art Basel Miami Beach; and Comforter at SFAQ [Project] Space (San Francisco). She has also given lectures at educational and art institutions such as York University and The Art Gallery of Ontario. Her work has been featured in publications including I.D., Dazed & Confused, NY Magazine, The New York Times, Teen Vogue, L’Uomo Vogue, Vogue ME China, Elle, Glamour, Jalouse, Vanity Fair, Purple, Interview, and Vice. In 2015 she released a short film series called Making Space about teen dancers, and curated a book called Babe published by Random House. Petra Collins: Coming of Age, the artist's first monograph, was published by Phaidon in October 2017.