The Internet Archive is a San Francisco based nonprofit digital library providing researchers, historians, scholars, people with disabilities, and the general public access to over 15 petabytes of collections of digitized materials, including websites, software applications/games, music, movies/videos, moving images, and nearly three million public-domain books, as well as the Wayback Machine archive (an archive of almost 300 billion websites documented over time). The Internet Archive visual arts residency is organized by Amir Saber Esfahani, and is designed to connect emerging and mid-career artists with the archive’s collections and to show what is possible when open access to information meets the arts. The residency is one year in length during which time each artist will develop a body of work that culminates in an exhibition utilizing the resource of the archive’s collection in their own practice.

During the residency Kim, Jenkins, and Odell worked with specific aspects of the Internet Archive, both at its Bay Area facilities and remotely in their studios, producing multi-media responses that employ various new media as well as more traditional materials and practices.
Jenny Odell: For my projects, I’m extracting “specimens” from 1980s Byte magazines and animation demo reels—specimens being objects or scenes that are intentionally or unintentionally surreal. These collected and isolated images inadvertently speak volumes about some of the stranger and more sinister aspects that technology has come to embody.

Jeremiah Jenkins: Browser History is a project is about preserving the Internet for the very distant future. I will be transferring webpages from the Internet Archive and elsewhere onto clay tablets by creating stamps with the text and images, then pressing them into wet clay. After being fired, the slabs will be hidden in caves, buried strategically, and submerged in the sea to await discovery in the distant future. The oldest known clay tablet is a little over 4,000 years old. The cave paintings in Lascaux are around 14,000 years old. The oldest known petroglyphs are near 46,000 years old. It’s conceivable that these fired clay tablets could last for 50,000 years or more. The tablets will be pages from websites that document trade, lifestyle, art, government, and other aspects of our society that are similar to the kinds of information we have about ancient civilizations.

Laura Hyunjhee Kim: The Hyper Future Wave Machine is a project that positions the years 2017 and beyond as a speculative future based on audiovisual ephemera published in the years 1987 to 1991. Born in the late ’80s, I wanted to explore the technological advancements and innovations that were popularized during the nascent years of the World Wide Web. Utilizing the Internet Archive as a time machine, I searched through the archived commercial and educational media representations of networked technology, personalized computers, and information systems. Often hyperbolic with a heightened emphasis on speed, power, and the future, slogans from those past years are still relevant and surface aspirations that continue to introduce the “next big thing” to the present generation: “REALIZE THE FUTURE, YOU ALREADY LIVE IN.”

As the title of the project suggests, the work revolves around an imaginary media access system, namely the Hyper Future Wave Machine (HFWM). Described as a three-way-cross-hybrid existing/nonexistent/and-yet-to-exist metaphysical machine, the concept came from contemplating data portability and the trajectory of human-machine interface technology that seamlessly minimizes physical interaction. From buttons to touchscreens to speech, would the next ubiquitously applied interface operate using some sort of nonverbal neural command? 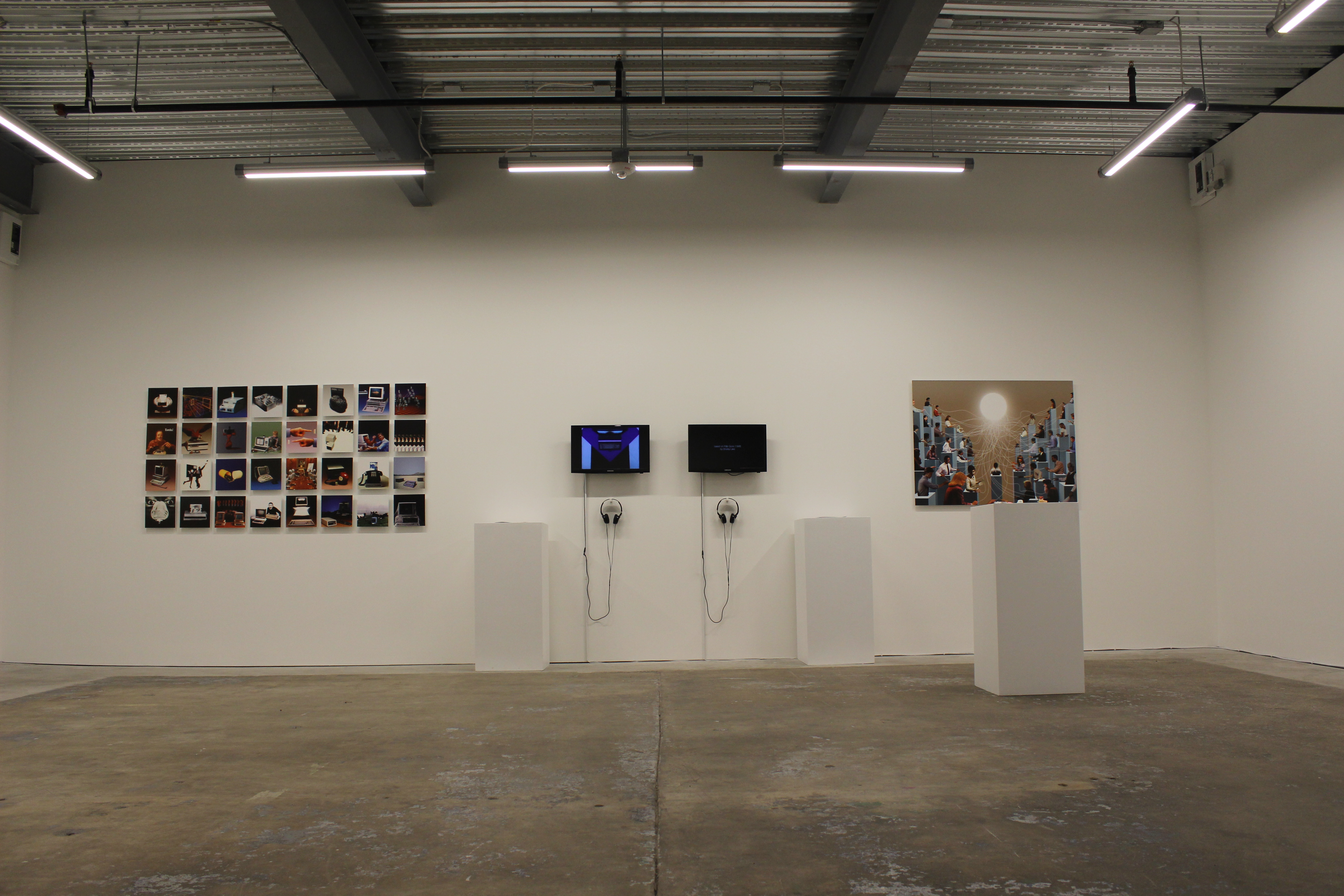 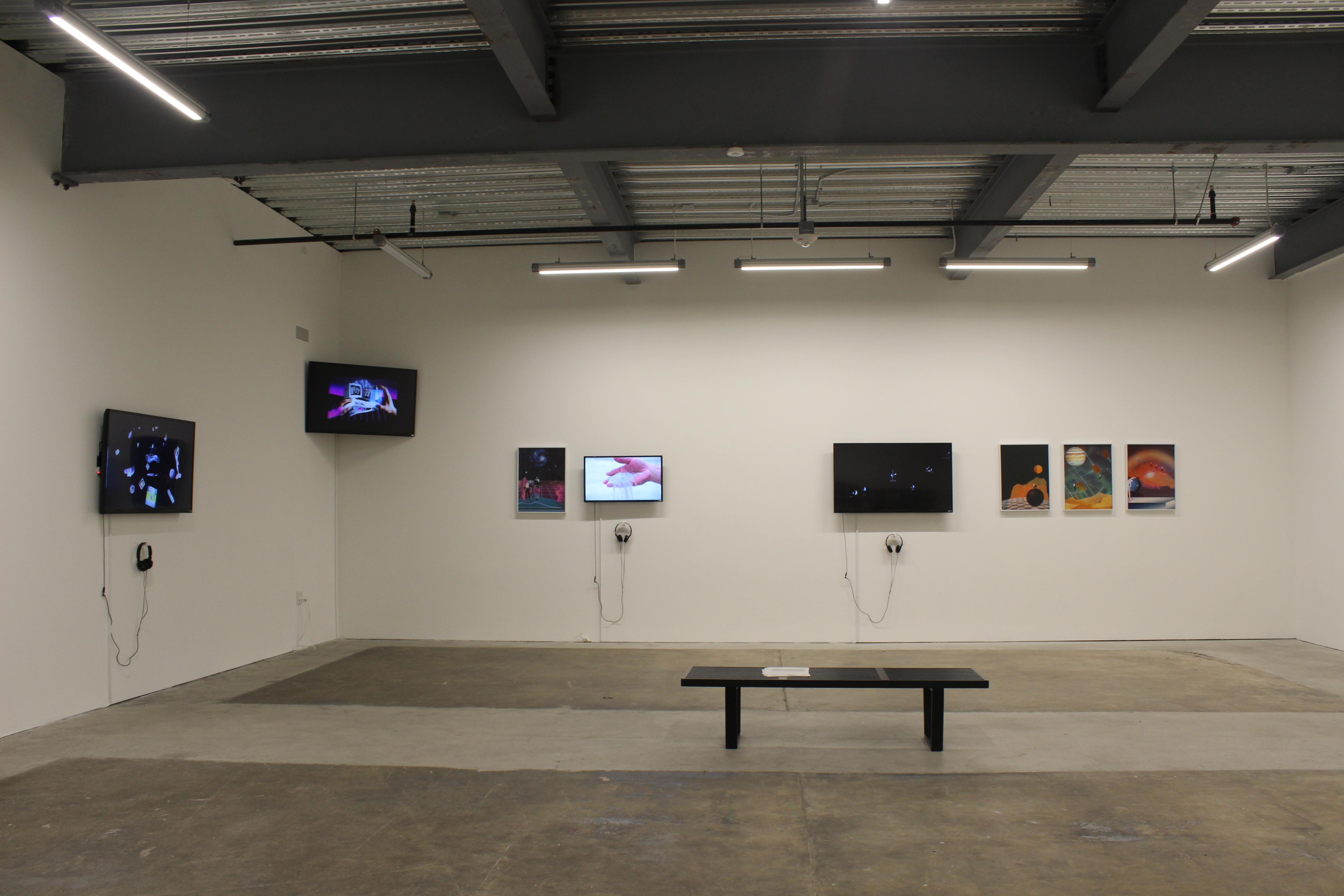