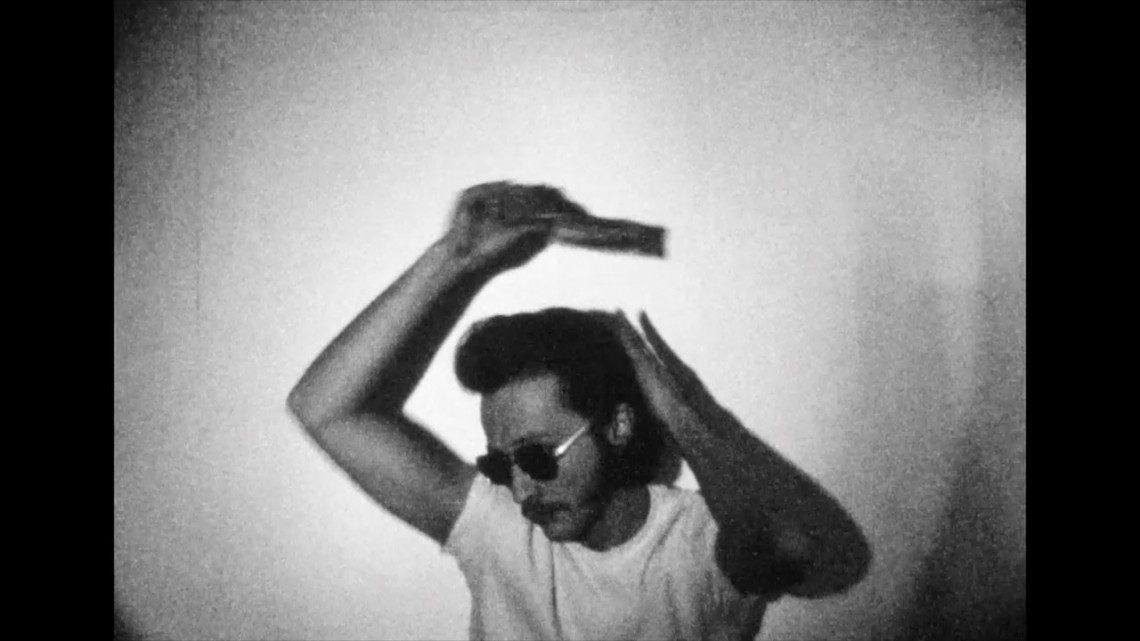 Ever Gold [Projects] is pleased to announce:

Ever Gold [Projects] is pleased to announce the final exhibition in our Tenderloin location, RR, a solo exhibition by one of the founders of the West Coast conceptual art movement and early video art pioneer, Paul Kos. After this exhibition closes on June 18, we will move all operations to our new 1,400 square foot location on the ground floor of the Minnesota Street Project building after 7.5 years at 441 O’Farrell Street. The artist will be in attendance at the opening reception.

Kos’s solo exhibition, RR, will focus on two works: RR, a previously unseen film from 1968, which will be projected in the main gallery space, and Kos’ first video work, Warlock(ing) from 1971, which will be shown with a new corresponding sculptural installation in the back room.

To pair these works in an exhibition is to look at a pivotal point in Kos’ work, and at the emergence of a new way of working with a new medium—half inch reel to reel video. In 1971, this technology was available to just a few artists in the Bay Area and New York. It represented a cheap alternative to film that included sound, editing capabilities on camera, and the ability to set up a camera, perform an action, and record it. At this time this emerging medium had two advocates: David Ross, first Curator of Video Art in the USA, at the Everson Museum, Syracuse, NY, and George Bolling, Video Curator of the de Saisset Gallery, Santa Clara University. Both Ross and Bolling had some of the first video equipment for recording by and for artists and likewise playback in their gallery spaces. In 1973 Kos purchased his own video portapack with the first round of grants from the NEA purposed for “New Media.” Kos would go on to win numerous grants and fellowships.

The first few weeks Kos had his new half inch video equipment he performed and recorded (in chronological order): Warlock(ing), rEVOLUTION (which was first shown in Fish, Fox, Kos, at the de Saisset Museum at Santa Clara University in 1971 and later Tokyo Rose in a 1975 solo exhibition at Castelli Gallery, New York.

Over the course of the performance for Warlock(ing), Kos constantly resets small game traps with thin plastic containers waiting for the rain to trigger them and crush the containers, while making sure not to trap his hand. RR is a departure from the genre of film he was producing during this period; shot in a studio with a white background, rock and roll music blasting, and no nature to be seen. By stark contrast in imagery, tone, and content, Warlock(ing) was shot in a muddy patch during a rainstorm, and is sometimes out of focus and blurry.

RR was made around the time that Kos was making early multimedia installations like Sound Of Ice Melting (1970), as well as doing private endurance pieces, which were documented by a Super 8mm black and white film camera. With this camera he was also documenting actions such as Roping Boar’s Tusk (1971) in Wyoming, where the artist traveled frequently from the Bay Area. Most of his action performances were done outside, using nature as a main visual element and subject.

Paul Kos, Warlock(ing), 1971. Half inch reel to reel video, black and white, 8:30 minutes. Courtesy of the artist and Ever Gold [Projects]

Since the early 1970s Paul Kos’s work has challenged conventions of art media and subject matter. For local and global audiences, he has staged new possibilities for artistic treatments of time, space and cultural systems, incorporating sculpture, performance, and new media in innovative arrangements. Kos, one of the founders of the Bay Area conceptual movement, has exhibited internationally and has work represented in major museum collections including: New York’s Museum of Modern Art and the Guggenheim Museum, the San Diego Museum of Contemporary Art, the San Francisco Museum of Modern Art, and the Stedelijk Museum in Amsterdam. A 2003 retrospective Everything Matters traveled from the Berkeley Art Museum and Pacific Film Archive to the Grey Gallery in New York, the Museum of Contemporary Art in San Diego, and the Contemporary Art Center in Cincinnati. Kos has received grants and awards from a range of institutions, including the Dodd Chair appointment at the University of Georgia, a Eureka Fellowship, a Flintridge Foundation grant, a Guggenheim Fellowship, a Rockefeller Fellowship, a Tiffany Fellowship and six NEA grants.

About Ever Gold [Projects]

Ever Gold [Projects] (formerly known as Ever Gold Gallery, 2009-2015) is an exhibitions program under the direction of Andrew McClintock, which has been located at 441 O’Farrell Street in the Tenderloin district of San Francisco since its founding. Beginning in March 2016, Ever Gold [Projects] will begin programming at its new location, in the new Minnesota Street Project complex in the Dogpatch neighborhood of San Francisco. At the end of June 2016, Ever Gold’s Tenderloin location will permanently close.